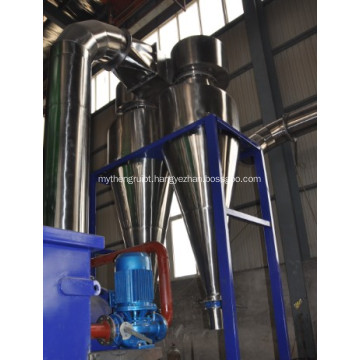 CONNECT cyclone is used to collect meal powder which goes out with odor from Dryer, it is working with negative pressure which sucked by vacuum station.

The airflow inside of cyclone is rotating movement, and steam of dust particles is separated from the odor due to centrifugal force. It is centrifugal dust removal technology which worked with centrifugal force to remove the dust. It mainly composed by cyliner, cone, odor intake pipeline and dust exhaust pipeline.

The working theory of Cyclone

When the dust goes with odor from dryer pass through cyclone, the air steam is approaching from the shape linear into rotary movement, and downward along the wall of cylinder with the spring shape, and toward the cone, usually call it external rotation airflow. During the airflow rotating, it generate centrifugal force, and the relative higher density particles is forced to the wall which lose the radial inertia fore and momentum, and along the gravity down into the dust discharging pipeline.

The features of Cyclone

1. There are no moving parts inside the cyclone, Easy maintenance.

2. It is convenient in manufacturing and management.

3. Handling the same amount of odor, the size is small, simple in structure and lower in cost

5. The more than one set of cyclone can be used when process large amount of odor, efficiency and resistance is not affected.

7. Used to catch the particles size which is from 5-15um 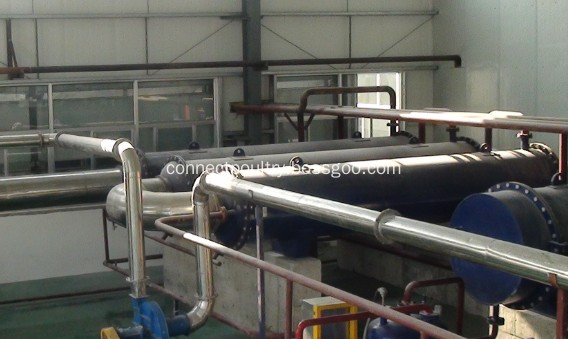 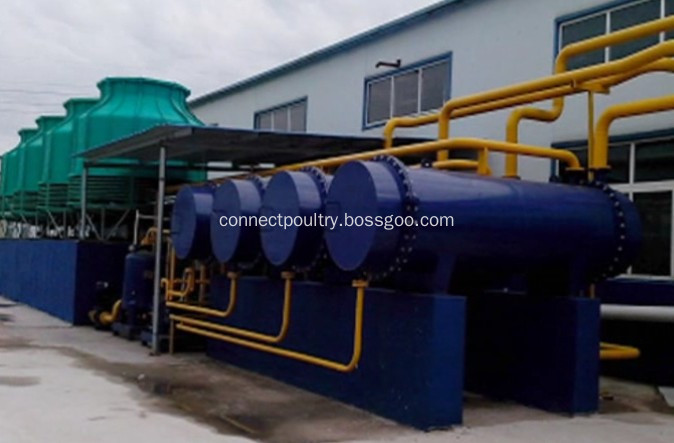 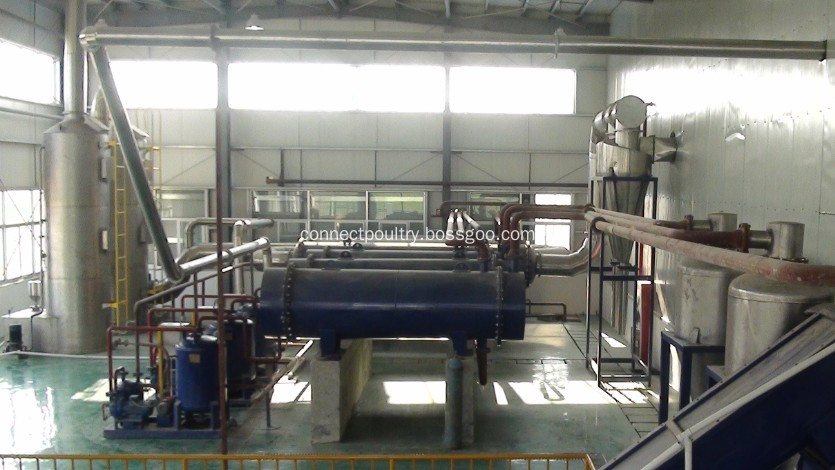 TURNKEY complete poultry project provider ,whole chicken business package solution for all clients. CONNECT Group is one of the leading poultry project package solution provider, the products and services including all the chicken field, start from egg hatchery, breeders raising, chicken parents raising, broiler house raising, broiler cage system, layer cage system, poultry processing equipment, fridge, rendering equipment for both poultry and animals waste. Our group totally have seven companies, which including one poultry processing equipment manufacture, two rendering equipment manufacture, one broiler equipment plant, one fridge equipment construction plant, one trading company which responsible for marketing and Import and Export, and one Industrial company, we also cooperate with Netherland poultry processing equipment supplier JM to build fully automatic poultry processing plant, which covers the shortage of fully automatic Evisceration and cut-up equipment in China market. CONNECT high quality performed equipment and experienced installation team, good after services system achieve a high quality poultry project for all clients. Equipment quality is the soul of the our company, Innovative is power for us constantly growing, good after services is the guarantee for quality project we make, feedback from clients help us growing self-improvement,Affirmation from clients bring us great proud of our work. CONNECT have the qualified products certificate to different countries in the world, UL,ASME, SONCAP, CE CONNECT exclusive service is project feasibility study, project finance which start from 4 million US Dollars which is up to 85% of the whole project equipment investment, project management. Join with CONNECT to build your quality chicken project. CONNECT looking for the qualified distributor who works in chicken field and understand the chicken farm project to build local selling base in different countries. If you are interests join with us pl sent email to us at support@slaughther-machinery.com for further application. CONNECT successfully build many projects in more than 30 countries worldwide, the projects scale from small to millions US dollars. CONNECT Project world: 1.Poultry raising Complete turnkey project including pre-fabricated house, equipment, installation,Management. 1.1 Broiler shed - ground, on net, cage system raising with complete equipments 1.2 Breeder and Grad parents shed -- with chain feeding system, drinker, .... 1.3 Hy-Line cage system --Pullets and layers farming in Battery cage system, or H cage system , with complete feeding, drinking, ventilation,egg handling, manure handling system 2.Poultry processing Equipment Packing solution for building, all processing equipments, Slaughterhouse- Full automatic and semi-automatic with different capacities, from 500 BPH to 12000BPH Fridge ----- Blast freezer, cold room, freezing tunnel, spiral freezer for slaughterhouse use Rendering equipment- Rendering not only waste from poultry, but also for animals, rendering poultry wastes, animal wastes of hog, cattle, sheep,blood,... Other type of animal carcass into high protein meal which as the additive for different kind of feed.

Email to this supplier